Teen Makes Clock for School That is Mistaken for Bomb 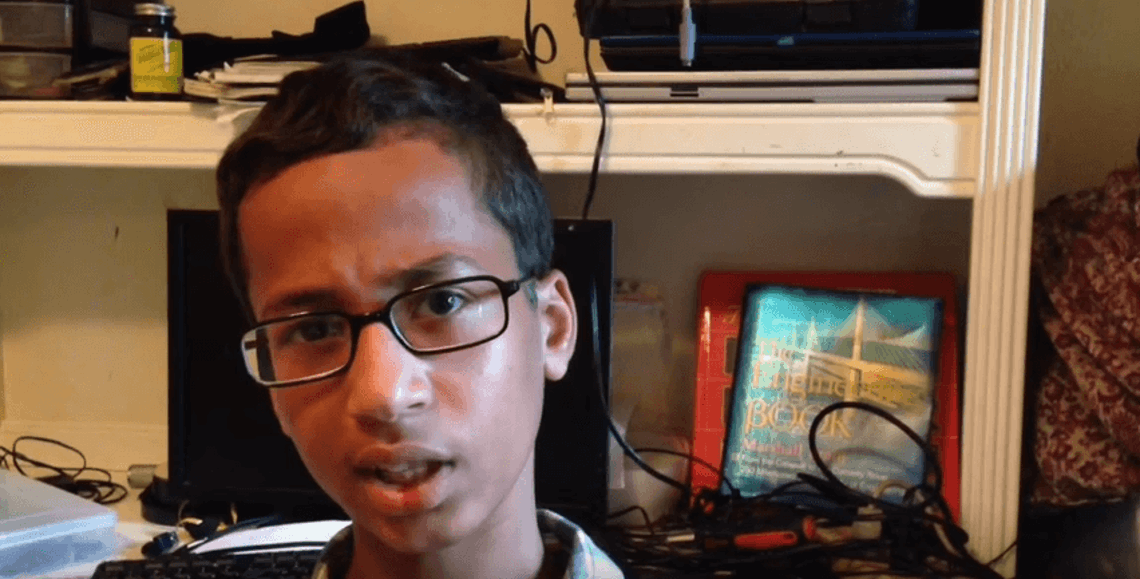 It’s an event that has snowballed into national headlines. 14-year-old high school student Ahmed Mohamed was arrested Monday in Irving, Texas, after bringing a homemade electronic clock to school. Although active in the school’s robotics club, an English teacher mistook the device for a bomb when the alarm accidentally went off in class.

Mohamed told a local news organization that he simply wanted to show his new teacher what he could do with his skills in building electronics. “He was like, ‘That’s really nice,’” Mohamed said of the robotics teacher. “I would advise you not to show any other teachers.”

When the English teacher discovered the device later that day, they confiscated it claiming that it looked like a bomb. Mohamed was pulled out of class and brought to the school principal and five police officers. According to NBC Dallas-Fort Worth, the teen was questioned, handcuffed, and even taken to the police headquarters for interrogation, fingerprinting, and mug shots; during the entire event, Mohamed claims that he repeatedly insisted it was just a clock.

Mohamed told NBC that his family surname continued to come up in police questioning. “I really don’t think it’s fair, because I brought something to school that wasn’t a threat to anyone,” he said.

How isolating teens who are different can have unintended consequences

Mohamed’s family suspects that the arrest was related to his last name and feelings of mistrust towards the Muslim community in the area. In a statement from the ACLU of Texas, executive director Terri Burke said, “Ahmed Mohamed’s avoidable ordeal raises serious concerns about racial profiling and the disciplinary system in Texas schools. Instead of encouraging his curiosity, intellect, and ability, the Irving ISD saw fit to throw handcuffs on a frightened 14 year-old Muslim boy wearing a NASA t-shirt and then remove him from school.”

Cool clock, Ahmed. Want to bring it to the White House? We should inspire more kids like you to like science. It's what makes America great.

Racial profiling is a growing concern for many across the country. Politicians even became involved in the discussion, tweeting their support for Mohamed across social media. The worry comes that isolating children and treating them differently based on appearance creates a division. Teens who feel like outsiders are more likely to become troubled and turn to sometimes dangerous alternatives for solace.

The hashtag #IStandWithAhmed is now trending on Twitter as a national dialogue is being created over the issue. Teens are most vulnerable because they already struggle to fit in; further classification can have dangerous outcomes.

On the other hand, paranoia is rampant as an increase in mass violence has parents and communities on edge. The solution comes in finding a balance between being cautious and being paranoid; disciplining teens and over-reaching authority. Fortunately, Ahmed’s situation may have a positive outcome, but for a lot of teens, the hurt and stress from a traumatic incident such as this can cause unintended consequences.

Three Points Center is a highly successful and sought-after program that helps adopted teens face their issues and take their own accountability in things. We firmly believe that the adopted teens who come to us are capable of making better choices and recognizing their own potential. To find out more, call us at (435) 635-0636.

This article is based on information obtained from NBCNews.com.